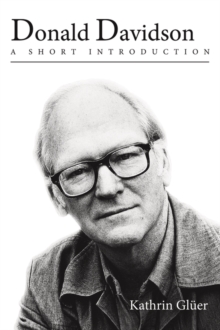 Donald Davidson was one of the 20th Century's deepest analytic thinkers.

He developed a systematic picture of the human mind and its relation to the world, an original and sustained vision that exerted a shaping influence well beyond analytic philosophy of mind and language.

At its center is an idea of minded creatures as essentially rational animals: Rational animals can be interpreted, their behavior can be understood, and the contents of their thoughts are, inprinciple, open to others.

The combination of a rigorous analytic stance with aspects of humanism so distinctive of Davidsonian thought finds its maybe most characteristic expression when this central idea is brought to bear on the relation of the mental to the physical: Davidson defended theirreducibility of its rational nature while acknowledging that the mental is ultimately determined by the physical. Davidson made contributions of lasting importance to a wide range of topics - from general theory of meaning and content over formal semantics, the theories of truth, explanation, and action, to metaphysics and epistemology.

These dense and thematically tightly interwoven essays present a profound challenge to the reader. This book provides a concise, systematic introduction to all the main elements of Davidson's philosophy.

It places the theory of meaning and content at the very center of his thought.

By using interpretation, and the interpreter, as key ideas it clearly brings out the underlying structure and unified nature of Davidson's work.

Kathrin Gluer carefully outlines his principal claims and arguments, and discusses them in some detail.

The book thus makes Davidson's thought accessible in itsgenuine depth, and acquaints the reader with the main lines of discussion surrounding it.