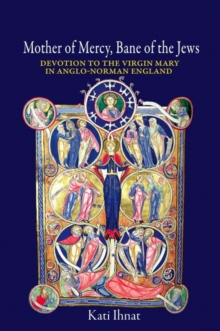 Mother of Mercy, Bane of the Jews : Devotion to the Virgin Mary in Anglo-Norman England Hardback

Mother of Mercy, Bane of the Jews explores a key moment in the rise of the cult of the Virgin Mary and the way the Jews became central to her story.

Benedictine monks in England at the turn of the twelfth century developed many innovative ways to venerate Mary as the most powerful saintly intercessor.

They sought her mercy on a weekly and daily basis with extensive liturgical practices, commemorated additional moments of her life on special feast days, and praised her above all other human beings with new doctrines that claimed her Immaculate Conception and bodily Assumption.

They also collected hundreds of stories about the miracles Mary performed for her followers in what became one of the most popular devotional literary genres of the Middle Ages.

In all these sources, but especially the miracle stories, the figure of the Jew appears in an important role as Mary's enemy.

Drawing from theological and legendary traditions dating back to early Christianity, monks revived the idea that Jews violently opposed the virgin mother of God; the goal of the monks was to contrast the veneration they thought Mary deserved with the resistance of the Jews. Kati Ihnat argues that the imagined antagonism of the Jews toward Mary came to serve an essential purpose in encouraging Christian devotion to her as merciful mother and heavenly Queen. Through an examination of miracles, sermons, liturgy, and theology, Mother of Mercy, Bane of the Jews reveals how English monks helped to establish an enduring rivalry between Mary and the Jews, in consolidating her as the most popular saint of the Middle Ages and in making devotion to her a foundational marker of Christian identity. 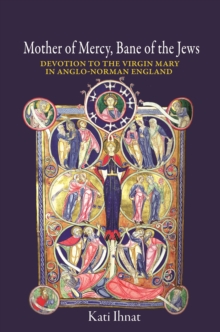 Mother of Mercy, Bane of the Jews