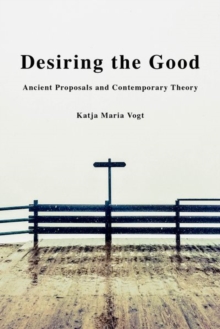 Desiring the Good defends a novel and distinctive approach in ethics that is inspired by ancient philosophy.

Ethics, according to this approach, starts from one question and its most immediate answer: "what is the good for human beings?"-"a well-going human life." Ethics thus conceived is broader than moral philosophy.

It includes a range of topics in psychology and metaphysics.

Plato's Philebus is the ancestor of this approach. Its first premise, defendedin Book I of Aristotle's Nicomachean Ethics, is that the final agential good is the good human life.

Though Aristotle introduces this premise while analyzing human activities, it is absent from approaches in the theory of action that self-identify as Aristotelian.

This absence, Vogt argues, is a deep andfar-reaching mistake, one that can be traced back to Elizabeth Anscombe's influential proposals. And yet, the book is Anscombian in spirit. It engages with ancient texts in order to contribute to philosophy today, and it takes questions about the human mind to be prior to, and relevant to, substantive normative matters.

In this spirit, Desiring the Good puts forward a new version of the Guise of the Good, namely that desire to have one's life go well shapes and sustains mid- andsmall-scale motivations.

A theory of good human lives, it is argued, must make room for a plurality of good lives.

Along these lines, the book lays out a non-relativist version of Protagoras's Measure Doctrine and defends a new kind of realism about good human lives.