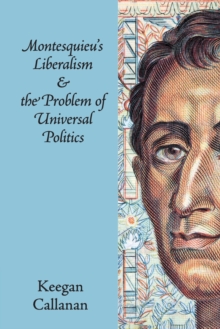 Montesquieu's Liberalism and the Problem of Universal Politics Paperback / softback

Dubbed 'the oracle' by no less an authority than James Madison, Montesquieu stands as a theoretical founder of the liberal political tradition.

But equally central to his project was his account of the relationship of law to each nation's particular customs and place, a teaching that militates against universal political solutions.

This teaching has sometimes been thought to stand in tension with his liberal constitutionalism.

In this book, Keegan Callanan argues that Montesquieu's political particularism and liberalism are complementary and mutually reinforcing parts of a coherent whole.

In developing this argument, Callanan considers Montesquieu's regime pluralism, psychological conception of liberty, approach to political reform, and account of 'the customs of a free people', including the complex interaction of religion and commerce.

Callanan concludes that, by re-orienting our understanding of liberalism and redirecting our attention toward liberty's distinctive preconditions, a return to Montesquieu's political philosophy leaves us better prepared to confront liberal democracy's contested claim to universality.