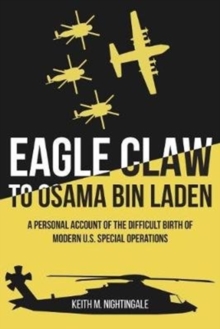 Phoenix Rising : From the Ashes of Desert One to the Rebirth of U.S. Special Operations Hardback

Phoenix Rising recounts the paradoxical birth of SOF through the prism of Operation Eagle Claw, the failed attempt to rescue fifty-two Americans held hostage in the U.S.

Embassy in Tehran. When terrorists captured the Embassy on November 4, 1979, the Joint Chiefs of Staff quickly realized that the United States lacked the military capability to launch a rescue.

There was no precedent for the mission, a mission that came with extraordinary restrictions and required a unique force to take it on.

With no existent command structure or budget, this force would have to be built from scratch in utmost secrecy, and draw on every branch of the U.S. military. Keith Nightingale, then a major, was Deputy Operations Officer and the junior member of Joint Task Force Eagle Claw, commanded by Major General James Vaught.

Based on Nightingale's detailed diary, Phoenix Rising vividly describes the personalities involved, the issues they faced, and the actions they took, from the conception of the operation to its hair-raising launch and execution.

His historically significant post-analysis of Eagle Claw gives unparalleled insight into how a very dedicated group of people from the Chief of Staff of the Army to lower-ranking personnel subjugated personal ambition to grow the forces necessary to address the emerging terrorist threat - a threat which the majority of uniformed leadership and their political masters denied in 1979.

The Special Operations capability of the United States today is the ultimate proof of their success.