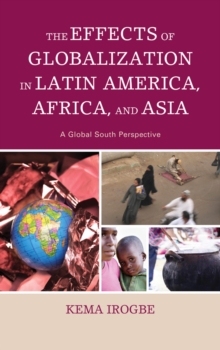 The Effects of Globalization in Latin America, Africa, and Asia : A Global South Perspective Paperback / softback

In The Effects of Globalization in Latin America, Africa, and Asia, Kema Irogbe argues that the forces of globalization, which include the IMF/World Bank, WTO, and Western media technology, are subordinated to the interests of multinational corporations under the tutelage of a lone superpower in strangling the development efforts of poor countries.

Irogbe subjects the operations and the existing relationships among these international governmental and nongovernmental actors to the test of empirical reality and logical plausibility by drawing from the experiences of a varied selection of marginalized countries, such as Venezuela, Guatemala, Mexico, Brazil in Latin America; Nigeria, South Africa, and Ghana in Africa; and Iraq, Iran, India, Afghanistan, and Vietnam in Asia.

The book argues that globalization is a sophisticated lexicon for the pursuit of a homogenized political, economic, and cultural world order, which is a recipe for unending global crises.