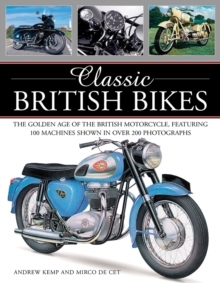 This book deals with the golden age of the British motorcycle, featuring 100 machines shown in over 200 photographs.

It offers a chronological survey of British motorcycles from the pioneers of 1900 through to the end of the 20th century.

From the beginning of the 20th century, the British motorcycle rapidly gained in reliability and sophistication.

It began as a plaything of the leisured classes, until the war forced it into a utilitarian role.

When peace returned in the 1920s, it was poised to fill a demand for mass transport, ushering in a golden age.

Divided into four sections - The Pioneers, Vintage Days, The Classic Era, and Endings and Beginnings - this book profiles 100 of the best-loved machines that shaped a century of motorcycle design.It includes all the famous marques, each one illustrated with identification photographs, making it a book every bike enthusiast will want to own.