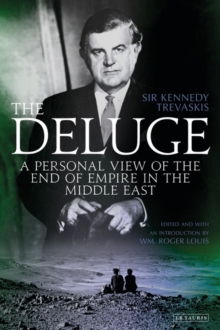 The Deluge : A Personal View of the End of Empire in the Middle East Hardback

Sir Kennedy Trevaskis was the last High Commissioner of South Arabia - a role he held from 1963-1965, which provided the pinnacle of his career and yet also his ultimate failure.

Trevaskis's imperial credentials were impeccable. He was a District Officer in Northern Rhodesia, followed by service in the Rhodesian Regiment in World War II, District Commissioner in the British Administered Eritrea after Italy's defeat, and finally High Commissioner in South Arabia and Aden colony.

But here the British ambition to set up the Federation of South Arabia with Aden was ultimately frustrated by the rise of Arab nationalism and the British Labour government's decision to withdraw `East of Suez'.

The Deluge is the memoir of a glittering career ending in ultimate failure and ignominy, but full of incident, humour and irreverence.

Published for the first time, and with an extensive introduction by Wm.

Roger Louis, this unique account sheds significant light on British foreign and imperial policy in the post-war era and particularly the end of empire in the Middle East.