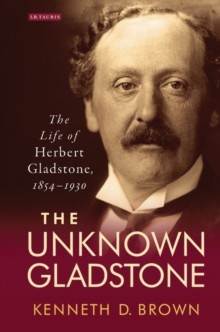 The Unknown Gladstone : The Life of Herbert Gladstone, 1854-1930 Hardback

Part of the Library of Victorian Studies series

Herbert Gladstone (1854-1930) was the only one of the sons of the renowned nineteenth-century Prime Minister William Ewart Gladstone to enjoy a significant political career in his own right.

Yet he has been generally relegated to the wings of history's stage, destined, it seems, to remain permanently in the shadow of his illustrious parent.

Such an outcome would not have troubled him unduly, for his whole life was shaped by deep affection and respect for his father while as a political actor he was happiest operating in the political shadows rather than in the limelight - serving for 30 years as a Liberal MP for Leeds with short periods as Home Secretary (1905-1910) and, as Viscount Gladstone, Governor-General of South Africa (1910-1914).

In exploring the intimate connection between Herbert Gladstone's public and private lives this new biography, the first for eighty years, reveals an unambitious, self-effacing man of faith and throws new light not only on his own career but also on significant episodes in British Victorian and early-twentieth century history.