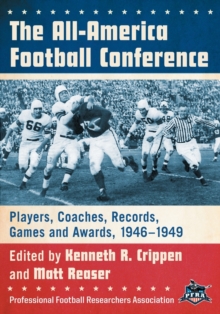 The All-America Football Conference and the National Football League battled for supremacy from 1946 through 1949.

In the end, the players from the AAFC, as well as three teams, were brought into the NFL, including many future members of the Pro Football Hall of Fame.

Through extensive research, the Professional Football Researchers Association (PFRA) has corrected the statistics and coaching records, selected All-Pro Teams for all four seasons and an All-Conference team, and provided brief biographies and scouting reports for the members of the All-Conference Team.