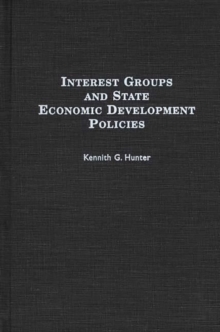 Then, with increasing competition from Asia, Germany, and South America, the recession of the 1980s, and the Reagan cutbacks in assistance to states, they began to place more emphasis on state economic development, finding that earlier policies did little to help their states develop economically.

Investigating a series of variables believed to influence variations in state economic policies, the author finds that contemporary theories do not adequately explain the relationship between the lobbying efforts of interest groups and differences in economic development policies.