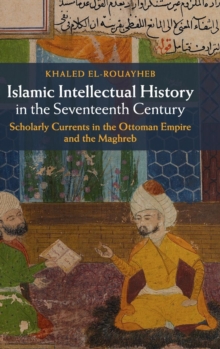 Islamic Intellectual History in the Seventeenth Century : Scholarly Currents in the Ottoman Empire and the Maghreb Hardback

For much of the twentieth century, the intellectual life of the Ottoman and Arabic-Islamic world in the seventeenth century was ignored or mischaracterized by historians.

Ottomanists typically saw the seventeenth century as marking the end of Ottoman cultural florescence, while modern Arab nationalist historians tended to see it as yet another century of intellectual darkness under Ottoman rule.

This book is the first sustained effort at investigating some of the intellectual currents among Ottoman and North African scholars of the early modern period.

Examining the intellectual production of the ranks of learned ulema (scholars) through close readings of various treatises, commentaries, and marginalia, Khaled El-Rouayheb argues for a more textured - and text-centered - understanding of the vibrant exchange of ideas and transmission of knowledge across a vast expanse of Ottoman-controlled territory.