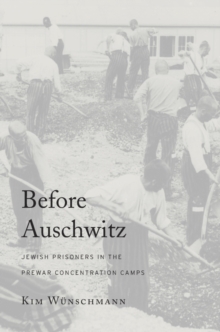 Before Auschwitz : Jewish Prisoners in the Prewar Concentration Camps Hardback

Auschwitz-the largest and most notorious of Hitler's concentration camps-was founded in 1940, but the Nazis had been detaining Jews in camps ever since they came to power in 1933.

Before Auschwitz unearths the little-known origins of the concentration camp system in the years before World War II and reveals the instrumental role of these extralegal detention sites in the development of Nazi policies toward Jews and in plans to create a racially pure Third Reich. Investigating more than a dozen camps, from the infamous Dachau, Buchenwald, and Sachsenhausen to less familiar sites, Kim Wunschmann uncovers a process of terror meant to identify and isolate German Jews in the period from 1933 to 1939.

The concentration camp system was essential to a regime then testing the limits of its power and seeking to capture the hearts and minds of the German public.

Propagandized by the Nazis as enemies of the state, Jews were often targeted for arbitrary arrest and then routinely subjected to the harshest treatment and most punishing labor assignments in the camps.

Some of them were murdered. Over time, shocking accounts of camp life filtered into the German population, sending a message that Jews were different from true Germans: they were portrayed as dangerous to associate with and fair game for acts of intimidation and violence. Drawing on a wide range of previously unexplored archives, Before Auschwitz explains how the concentration camps evolved into a universally recognized symbol of Nazi terror and Jewish persecution during the Holocaust.