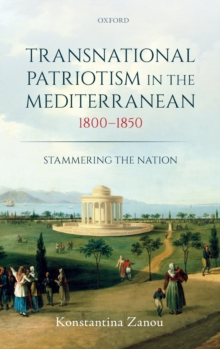 Transnational Patriotism in the Mediterranean, 1800-1850 : Stammering the Nation Hardback

Transnational Patriotism in the Mediterranean investigates the long process of transition from a world of empires to a world of nation-states by narrating the biographies of a group of people who were born within empires but came of age surrounded by the emerging vocabulary of nationalism, much of which they themselves created.

It is the story of a generation of intellectuals and political thinkers from the Ionian Islands who experienced the collapse of the Republic of Venice and the dissolution of the common cultural and political space of the Adriatic, and who contributed to the creation of Italian and Greek nationalisms.

By uncovering this forgotten intellectual universe, Transnational Patriotism in the Mediterranean retrieves a world characterized by multiple cultural, intellectual, and politicalaffiliations that have since been buried by the conventional narrative of the formation of nation-states.

Transnational Patriotism in the Mediterranean rethinks the origins of Italian and Greek nationalisms and states, highlighting the intellectual connection between the Italian peninsula, Greece, and Russia, and reestablishing the lost link between the changing geopolitical contexts of western Europe, the Mediterranean, and the Balkans in the Age of Revolutions.

It re-inscribes important intellectuals and political figures, considered 'national fathers' of Italy and Greece (such as UgoFoscolo, Dionysios Solomos, Ioannis Kapodistrias and Niccolo Tommaseo), into their regional and multicultural context, and shows how nations emerged from an intermingling, rather than a clash, of ideas concerning empire and liberalism, Enlightenment and religion, revolution and conservatism, and East andWest.