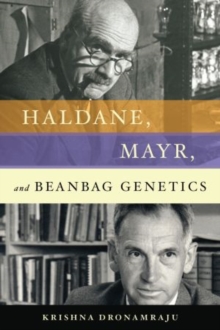 Haldane and Ernst Mayr - regarding the value of the contributions of the mathematical school represented by J.B.S.

Haldane, R.A. Fisher and S. Wright to the theory of evolution. Their pioneering contributions from 1918 to the 1960s dominated and shaped the field of population genetics, unique in the annals of science.

In 1959, Mayr questionedwhat he regarded as the beanbag genetic approach of these pioneers to evolutionary theory, "an input or output of genes, as the adding of certain beans to a beanbag and the withdrawing of others." In 1964, Mayr's contention was refuted by Haldane in a remarkably witty, vigorous and pungent essay, "A defenseof beanbag genetics" which compared the mathematical theory to a scaffolding within which a reasonably secure theory expressible in words may be built up.

Correspondence between Haldane and Mayr is included. Beanbag genetics has come a long way since 1964. Mayr's (1959) critique of simple uncomplicated population genetics is no longer valid.

These may be regarded as the advanced beanbag models.

Molecular genetics has made it possible to study evolution rates at the nucleotide level.

It is also possible today tocompare DNA similarities and divergence in diverse species of animals and plants, which were not previously crossable.