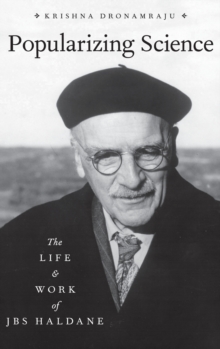 Popularizing Science : The Life and Work of JBS Haldane Hardback

J.B.S. Haldane (1892-1964) is widely appreciated as one of the greatest and most influential British scientists of the 20th century, making significant contributions to genetics, physiology, biochemistry, biometry, cosmology, and other sciences. More remarkable, then, is the fact that Haldane had no formal qualification in science. He made frequent appearances in the media, making pronouncements on a variety of poignant topics including mining disasters,meteorites, politics, and the economy, and was a popular scientific essay writer. Haldane also was famed for conducting painful experiments on himself, including several instances in which he permanently himself. A staunch Marxist and convert to Hinduism, Haldane lived a diverse, lively and interesting lifethat is still revered by today's science community. A biography of Haldane has not been attempted since 1968, and that book provided an incomplete account of the man's scientific achievement. "The Life and Works of J.B.S. Haldane" serves to fix this glaring omission, providing a complete biographical sketch written by Krishna Dronamraju, one of the last living men to have worked personally with Haldane. A new genre of biographies of 20th-century scientists has come into being, and thus far works have been written about men like Einstein,Oppenheimer, Bernal, Galton, and many more; the inclusion of Haldane within this genre is an absolute necessity. Dronamraju evaluates Haldane's social and political background, as well as his scientific creativity and accomplishments. Haldane embodies a generation of intellectuals who believed andpromoted knowledge for its own sake, and that spirit of scientific curiosity and passion is captured in this biography.