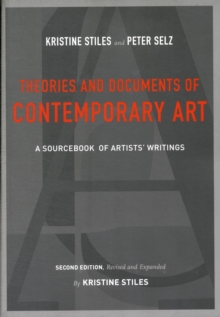 First published in 1996, this irreplaceable resource has now been updated, revised, and expanded by Kristine Stiles to represent thirty countries and more than one hundred new artists.

Stiles has added forty images and a diverse roster of artists, including many who have emerged since the 1980s, such as Julie Mehretu, Carrie Mae Weems, Damien Hirst, Shirin Neshat, Cai Guo-Qian, Olafur Eliasson, Matthew Barney, and Takashi Murakami.

The writings, which as before take the form of artists' statements, interviews, and essays, make vivid each artist's aesthetic approach and capture the flavor and intent of his or her work.

The internationalism evident in this revised edition reflects the growing interest in the vitality of contemporary art throughout the world from the U.S. and Europe to the Middle East, Asia, Africa, Latin America, and Australia.