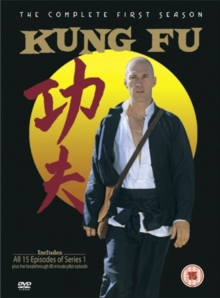 Pilot episode and all 15 episodes from Season 1 of the 1970s series set in the 1870s and starring David Carradine as Kwai Chang Caine, a half-Chinese, half-American Shaolin priest, who is roaming the Wild West in search of his missing brother.

In the pilot epsiode, 'Kung Fu: The Way of the Tiger, the Sign of the Dragon', Caine runs away from his native China after accidentally killing the Emperor's nephew.

He ends up in the American West, where he becomes the champion of the oppressed workers building the transcontinental railroad.

Bounty hunters are after Caine in 'King of the Mountain', threatening the safety of a widow and homeless boy Caine has befriended. 'Dark Angel' sees Caine mentoring Serendipity Johnson, a poor preacher who has been blinded by the Indians, and helping him to develop his other senses so that his blindness is less of a handicap.

In 'Blood Brother', Caine discovers that the narrow-minded, bigoted residents of a small town have killed a priest of whom they were suspicious and mistrusting.

A young woman approaches Caine in 'An Eye for an Eye' to enlist his help with getting revenge on the soldier who raped her.

In 'The Tide', Caine relies on the protection of a beautiful and mysterious Chinese girl to protect him from bounty hunters after sustaining serious injuries. 'The Soul is the Warrior' sees Caine encountering a sheriff who is facing imminent death.

In 'Nine Lives', Caine meets an Irish miner who has accidentally killed his camp's mascot: a beer-drinking cat.

In order to return to work he must find a replacement - and quickly. 'Sun and Cloud Shadow' sees Caine acting as mediator between a small Chinese mining village and a powerful rancher who claims that the mine they are working belongs to him.

In 'Chains', Caine finds himself shackled to an angry and bitter man, and teaches him how to control his hatred and be at peace with himself.

Jodie Foster, then a relatively unknown child actor, guest stars in 'Alethea' as a young girl who speaks out against Caine, testifying that that she witnessed him shooting a man, after he is put on trial for a murder he did not commit.

In 'The Praying Mantis Kills', a young boy defends a jail against the gunmen who killed his father, the sheriff.

Caine is captured and forced to labour as a slave in a silver mine in 'Superstition'.

The mine then caves in, trapping him and the other miners. 'The Stone' sees Caine get tangled up in an affair involving a priceless diamond, a Brazilian slave, and the three revenge-seeking sons of a woman spurned by her lover.

In 'The Third Man', a gambler who has been injured by thieves is then shot by an anonymous gunman.

Finally, 'The Ancient Warrior' sees Caine attempting to honour the death wish of an Indian warrior who wants to die at his predestined burial place - which just happens to be in the middle of an Indian-hating community. 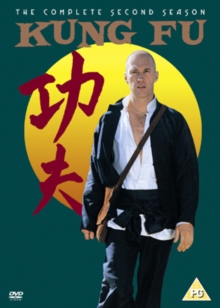