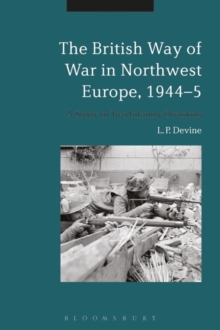 The British Way of War in Northwest Europe, 1944-5 : A Study of Two Infantry Divisions Paperback / softback

This book examines the experience of two British Infantry Divisions, the 43rd (Wessex) and 53rd (Welsh), during the Overlord campaign in Northwest Europe.

To understand the way the British fought during Operation Overlord, the book considers the political and military factors between 1918 and 1943 before addressing the major battles and many of the minor engagements and day-to-day experiences of the campaign. Through detailed exploration of unit war diaries and first-hand accounts, Louis Devine demonstrates how Montgomery's way of war translated to the divisions and their sub units. While previous literature has suggested that the British Army fought a cautious war in order to avoid the heavy casualties of the First World War, Devine challenges this concept by showing that the Overlord Campaign fought at sub-divisional levels was characterised by command pressure to achieve results quickly, hasty planning and a reliance on massive artillery and mortar contributions to compensate for deficiencies in anti-tank and armoured support. By following two British infantry divisions over a continuous period and focusing on soldiers' experience to offer a perspective `from below', as well as challenging the consensus of a `cautious' British campaign, this book provides a much-needed re-examination of the Overlord campaign which will be of great interest to students and scholars of the Second World War and modern military history in general.