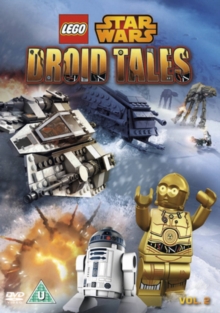 Collection of three episodes from the children's animated series.

In 'Mission to Mos Eisley' C-3P0 (voice of Anthony Daniels) sets off on a mission to recover R2-D2 who has been kidnapped!

Luckily he manages to persuade Chewie to cut his holiday short to help.

In 'Flight of the Falcon' their search for R2-D2 leads the pair aboard the Millenium Falcon to Geonosis.

In the process, C-3P0 stumbles upon Imperial General Veer (Colin Murdock)'s plan to create a new army of battle droids.

In 'Gambit On Geonosis' the crew are held captive as the General begins to put his plan into action.

Will they be able to escape and warn Luke (Eric Bauza), Leia (Heather Doerksen) and Han (Michael Daingerfield) before it's too late?