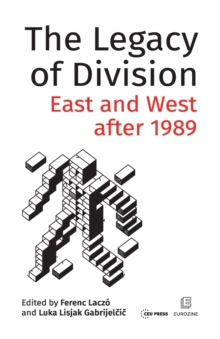 The Legacy of Division : East and West After 1989 Paperback / softback

This volume examines the legacy of the East-West divide since the implosion of the communist regimes in Europe.

The ideals of 1989 have largely been frustrated by the crises and turmoil of the past decade.

The liberal consensus was first challenged as early as the mid-2000s.

In Eastern Europe, grievances were directed against the prevailing narratives of transition and ever sharper ethnic-racial antipathies surfaced in opposition to a supposedly postnational and multicultural West.

In Western Europe, voices regretting the European Union's supposedly careless and premature expansion eastward began to appear on both sides of the left-right and liberal-conservative divides.

The possibility of convergence between Europe's two halves has been reconceived as a threat to the European project. In a series of original essays and conversations, thirty-three contributors from the fields of European and global history, politics and culture address questions fundamental to our understanding of Europe today: How have perceptions and misperceptions between the two halves of the continent changed over the last three decades?

Can one speak of a new East-West split? If so, what characterizes it and why has it reemerged?

The contributions demonstrate a great variety of approaches, perspectives, emphases, and arguments in addressing the daunting dilemma of Europe's assumed East-West divide.