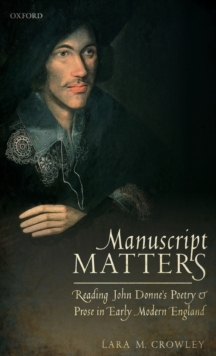 Manuscript Matters illuminates responses to some of John Donne's most elusive texts by his contemporary audiences.

Many literary manuscripts that include poems by Donne and his contemporaries were compiledduring their lifetimes, often by members of their circles.

Compilers,scribes, owners, and other readers-men and women who shared in Donne's political, religious, and social contexts-offer clues to their literary responses within a range of features related to the construction and subsequent use of the manuscripts.

This study's findings call us to investigate more extensively and systematically how certain early manuscripts were constructed through analysis of such features as scripts, titles, sequence of contents, ascriptions, and variant diction.

While such studies can throw light on many early modern texts, exploring artefacts containing Donne's works proves particularly useful because more of his poetry circulated in manuscript than did that of any other early modern poet.

Manuscript Mattersengages Donne's satiric, lyric, and religious poetry, as well as his prose paradoxes and problems.

Analysing his texts within their manuscript contexts enables modern readers to interpret Donne's poetry and prose through an early modern lens.