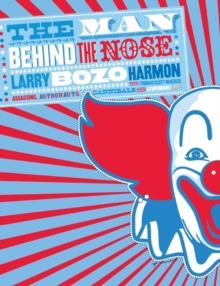 The Man Behind the Nose : Assassins, Astronauts, Cannibals, and Other Stupendous Tales Hardback

He was - literally - the world's most famous clown.

From 1956 onward, Larry Harmon was Bozo the Clown: the face of fun and childhood in America, the jolly and ubiquitous presence who dominated everything from shopping-center grand openings to TV shows to international tours.

As a young man, Al Jolson told him he was destined to become a world-famous entertainer.

In 1963, President John F. Kennedy called personally to name him as an international ambassador for safety.

In 1984, he ran for president himself. He was a bridge from the age of vaudeville and "The Big Top" to the age of suburban America.

From Ronald McDonald to Krusty the Clown, every clown who followed him owed something to him.

Shortly before his death in 2008, Harmon finished writing this unique autobiography.

Charming, friendly, wise, and full of laughter, it's also full of unexpected stories: of choreographing a dance routine with Fred Astaire; of training for space flights at NASA; of decorating Clark Gable's house; of searching for the cannibals of New Guinea; and, of surviving two assassination attempts.

But always it is animated by that Bozo spirit. There is never a frown behind the smile-just another smile, another laugh, another story.