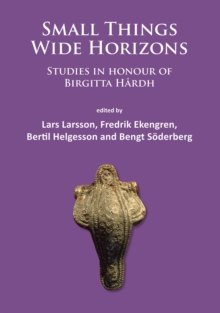 This publication honours Birgitta Hardh on her 70th birthday.

Birgitta Hardh is one of the leading experts on European Viking Age, engaged in diverse research projects, and also a vital collaborator in various networks specializing in the period.

Through time, Birgitta has extended her research to comprise other periods of the Iron Age.

A feature common to all Birgitta Hardh's research is that she has been able, through analysis of a body of finds, to broaden the perspective, not least geographically through her profound knowledge of phenomena in Northern Europe and indeed all of Europe.

Therefore, this book has been given the title Small Things - Wide Horizons.

A total of fourty titles have been submitted to the volume.

The presentations include a number of perspectives mainly of Iron Age.

Themes as silver economy, coins, trinkets, burials, crafts, farms and fields, centrality and transformations give a view of the variation of contributions nationally and internationally.