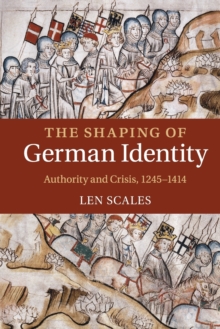 The Shaping of German Identity : Authority and Crisis, 1245-1414 Paperback / softback

by Len (University of Durham) Scales

German identity began to take shape in the late Middle Ages during a period of political weakness and fragmentation for the Holy Roman Empire, the monarchy under which most Germans lived.

Between the thirteenth and fifteenth centuries, the idea that there existed a single German people, with its own lands, language and character, became increasingly widespread, as was expressed in written works of the period.

This book - the first on its subject in any language - poses a challenge to some dominant assumptions of current historical scholarship: that early European nation-making inevitably took place within the developing structures of the institutional state; and that, in the absence of such structural growth, the idea of a German nation was uniquely, radically and fatally retarded.

In recounting the formation of German identity in the late Middle Ages, this book offers an important new perspective both on German history and on European nation-making.