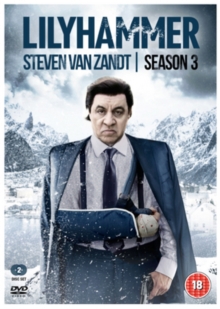 All eight episodes from the third series of the TV comedy drama centering on a mafia mobster's attempts to start a new life in Lillehammer, Norway.

After testifying against his old buddies in the mob, New York gangster Frank 'The Fixer' Tagliano (Steven Van Zandt) enters the FBI witness protection programme, choosing to be relocated to Lillehammer, Norway claiming he liked the look of it when he saw the 1994 Winter Olympics on TV.

Now Norwegian-American immigrant Giovanni Henriksen, he quickly sets about making his new life as comfortable as he can by casually employing a mix of blackmail, extortion and threats to further his ambitions.

Unfortunately for Frank, however, his arrival in the town has not gone entirely unnoticed, as the local police soon begin to take an interest in him.

The episodes are: 'Tiger Boy', 'Foreign Affairs', 'The Homecoming', 'The Mind Is Like a Monkey', 'Tommy', 'The Minstrel Boy', 'The Funeral' and 'Loose Ends'.