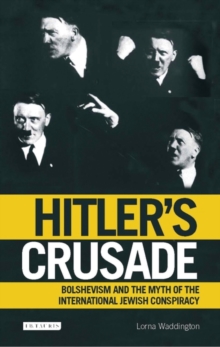 Hitler's Crusade : Bolshevism and the Myth of the International Jewish Conspiracy Paperback / softback

In the early hours of 22 June 1941 units of the Wehrmacht began to pour into the Soviet Union - an undertaking long planned by Adolf Hitler.

Since the 1920s, National Socialist doctrine had largely been determined by an intense hatred and hostility towards not only the Jews but also towards Bolshevism.

This ideology, Lorna Waddington argues, had been identified by Hitler and his acolytes as the political poison concocted by the Jews in an attempt to impose, as he saw it, their own tyrannical domination across the globe.

Hitler's Crusade explores this crucial dimension to Hitler's Weltanschauung, delving into the little-known activities of the Antikomintern, as well as offering fresh insights on well-documented events.

This is the definitive analysis of Hitler's attitude towards Bolshevism, the destruction of which he was still describing in early 1945 as the raison d'etre of the Nazi movement.