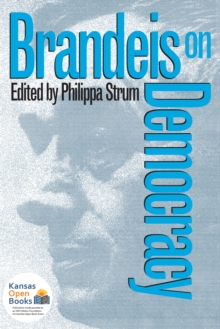 Philippa Strum, our foremost authority on Louis Brandeis, gathers together for the first time a sterling selection from his most provocative and profound writings.

A kind of "Portable Brandeis," this book provides a concise and readable guide to the thought of a truly great American. Brandeis, the Ralph Nader of the early twentieth century, was known as the "People's Attorney" for his continuous crusades on behalf of the public.

He spoke before citizens' groups and legislative bodies, wrote articles for popular magazines, put his ideas about industrial democracy in the briefs he submitted as a lawyer and later in the opinions he wrote as a Supreme Court justice (1916-1938), and advised presidents Woodrow Wilson and Franklin Roosevelt. The problems Brandeis faced and the answers he fashioned could have leaped from today's newspapers: corruption in government, conflicts between majority rule and minority rights, movements to limit free speech and the right to privacy, gender equality, the importance of education, the causes of and possible solutions for poverty, the social costs of excessive political or corporate power, the uneasy relationship between lawyers and the public, efficiency and justice in the workplace, the tension between Federal power and states' autonomy, and the responsibility of citizens to their community. In all his endeavors, Brandeis emphasized both political and economic democracy, citizen participation, and a balance between rights and responsibilities.

As leader of the American Zionist movement from 1914 through the 1930s, he dreamed of a democratic Jewish homeland in Palestine founded on Jeffersonian principles. And there were similar echoes of the Founding Fathers in his campaign against the corporate trusts in the United States. These selections from Brandeis's speeches, letters to family and colleagues, newspaper interviews, articles, and judicial opinions offer us the essence of Brandeis's genius and allow us to appreciate the range and relevance of his ideas for America today. 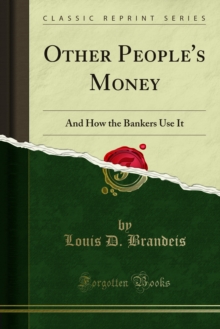 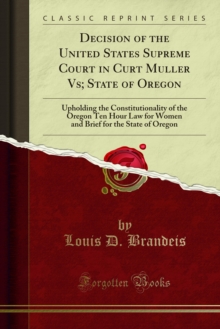 Decision of the United States Supreme...