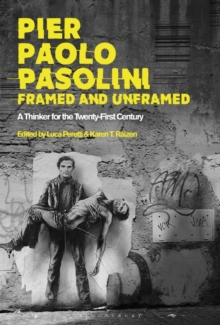 Pier Paolo Pasolini, Framed and Unframed : A Thinker for the Twenty-First Century Hardback

This cross-disciplinary volume, Pier Paolo Pasolini, Framed and Unframed, explores and complicates our understanding of Pasolini today, probing notions of otherness in his works, his media image, and his legacy.

Over 40 years after his death Pier Paolo Pasolini continues to challenge and interest us, both in academic circles and in popular discourses.

Pasolini has also become an image, a mascot, a face on tote bags, a graffiti image on walls, an adjective (pasolinian).

The collected essays push us to consider and reconsider Pasolini, a thinker for the twenty-first century.