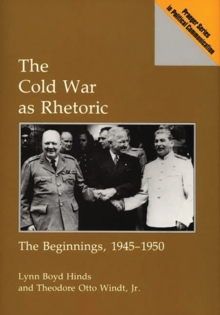 In this important new contribution to Praeger's Series in Political Communication, they examine how the rhetoric of the early Cold War years was used to create and develop a national and international reality.

The pervasive political view of events, motives, actions, and policy was largely created in the years between 1945 and 1950 and grew from a pre-existing set of rhetorical beliefs as well as from the political speeches and pronouncements of the time. Hinds and Windt focus their study on American rhetoric applied to Soviet-American relations, centering essentially on Europe.

They offer a brief outline of the theoretical principles used in their analysis, and follow with a look at certain images of the USSR selected for use by American politicians.

In subsequent chapters, the authors trace developments from the end of World War II to Winston Churchill's Iron Curtain speech, thoroughly explore the British leader's address and its effect in dividing the world into two warring camps, analyze the writing and presentation of the 1947 Truman Doctrine and its suggestion of two ways of life, and detail the Truman Loyalty Program and the 1947 House Committee on Un-American Activities hearings in Hollywood.

The remaining chapters discuss George Marshall's address originating the European Recovery Act, George Kennan's Sources of Soviet Conduct, contemporary critics, and such proofs as the Korean War, which showed the rhetoric to be correct.

This work will be an important reference tool for courses in political communication, American history, political science, and presidential studies, and a useful addition to library collections.