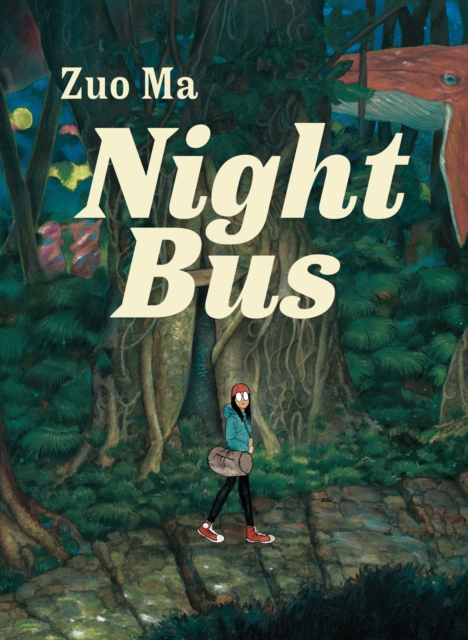 Journey through the countryside in this magical realist debut from an underground Chinese cartoonist. In Night Bus, a young woman wearing round glasses finds herself on an adventurous late night bus ride that constantly makes detours through increasingly fantastical landscapes.

Meanwhile a young cartoonist returns home after art school and tries his hand at becoming a working artist while watching over his aging grandmother whose memory is deteriorating.

Nostalgic leaps take us to an elementary school gymnasium that slowly morphs into a swamp and is raided by a giant catfish.

Beetles, salamanders, and bug-eyed fish intrude upon the bus ride of the round-glasses woman as the night stretches on.

Night Bus blends autobiography, horror, and fantasy into a vibrantly detailed surreal world that shows a distinct talent surveying his past. Nature infringes upon the man-made world via gigantism and explosive abundance the images in Night Bus are often unsettling, not aimed to horrify, but to upset the balance of modern life. Zuo Ma is part of a burgeoning Chinese art comics scene that pushes emotion to the forefront of the story while playing with action and dreams.