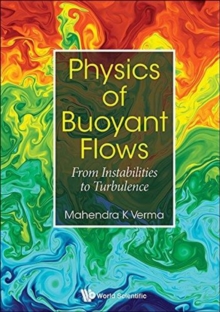 Physics Of Buoyant Flows: From Instabilities To Turbulence Hardback

Gravity pervades the whole universe; hence buoyancy drives fluids everywhere including those in the atmospheres and interiors of planets and stars.

In this book we present fundamentals and applications of thermal convection and stratified flows.Buoyancy brings in extremely rich phenomena including waves and instabilities, patterns, chaos, and turbulence.

In this book we present these topics in a systematic manner.

First we present a unified treatment of linear theory that yields waves and thermal instability for stably and unstably-stratified flows respectively.

We extend this analysis to include rotation and magnetic field.

We also describe nonlinear saturation and pattern formation in Rayleigh-Benard convection.The second half of the book is dedicated to buoyancy-driven turbulence, both in stably-stratified flow and in thermal convection.

We describe the spectral theory including energy flux and show that the thermally-driven turbulence is similar to hydrodynamic turbulence.

Thus, this book presents all the major aspects of the buoyancy-driven flows in a coherent manner that would appeal to advanced graduate students and researchers.