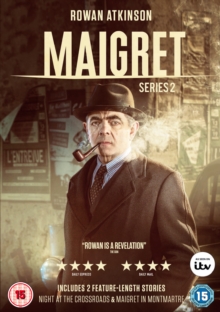 Double bill of mystery dramas based on the novels by Georges Simenon and starring Rowan Atkinson as the eponymous French detective.

In 'Night at the Crossroads', Maigret is tasked with investigating the murder of a jewel dealer.

When his body is discovered at the home of Dane Carl Anderson (Tom Wlaschiha) he becomes the prime suspect.

Despite all the evidence pointing towards his guilt, Carl maintains his innocence, leading Maigret to delve deeper into the mystery.

In 'Maigret in Montmartre', a stripper named Arlette (Olivia Vinall) flees to the police after overhearing a plot to assassinate the Countess (Nicola Sloane).

When she is found dead just hours later, along with the Countess, Maigret sets out to find the culprit before they can strike again.