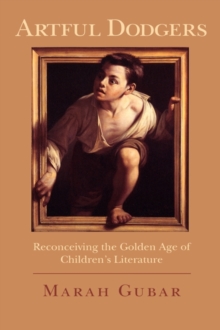 In this new account of the Golden Age of children's fiction, Marah Gubar offers a redefinition of the phenomenon known as the 'cult of the child'.

M. Barrie - authors traditionally criticized for arresting the child in a position of iconic innocence - and contends that they in fact rejected this simplistic "child of Nature" paradigm in favor of one based on the child as anartful collaborator.

Resisting the Romantic tendency to imagine the child as a pure point of origin, they acknowledge the pervasive power of adult influence, while suggesting that children can and have shared in the shaping of their stories.

In her examinations of such classics as Alice's Adventures inWonderland, Treasure Island, and The Secret Garden, Gubar uncovers a childhood culture of collaboration in Victorian England in which the ability to work and play alongside adults was often taken for granted.

True, this era saw a host of new efforts to establish a strict dividing line between childhood and adulthood, innocence and experience.

But despite strenuous reform efforts, many Victorians remained unconvinced of the separateness and sanctity of childhood, including the most influentialparticipants in the cult of the child.

Long condemned for erecting a barrier of sentimental nostalgia between adult and child, many late Victorians are here shown to have resisted this trend by instead conceiving of the child as uniquely capable of artistic and intellectual partnership.