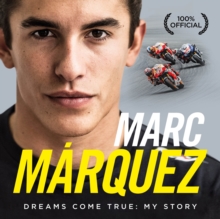 'He has all the potential to become the greatest of all time' Valentino Rossi, nine-time world championMarc Marquez is a phenomenon in the world of motorsports.

In his first season in MotoGP, at the tender age of 20, he achieved the extraordinary by becoming the youngest world champion ever.

He's currently dominating in his second season, and is set to become the greatest the sport has ever seen. In his first official biography - fully-illustrated with many unseen photographs - Marc offers an exclusive insight into his first year racing in the premier class and his historic championship win.

Through the words of his team, his family and his rivals for the title, we begin to understand the answer to his remarkable success. It's the story of Marc's greatest risks and challenges, from vision problems that put a halt on his career to the huge crash in May that saw him flying off his bike at a staggering speed of 175 mph.

But Marc continues to rewrite history, earning titles with his fearless racing and winning fans with his boyish charm and famous smile - and smashing every record along the way.