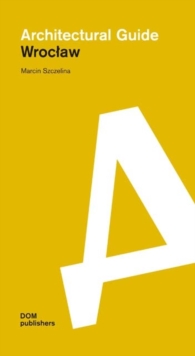 Wroclaw is one of the oldest cities in Poland with a long and turbulent history that is manifest on every corner.

Throughout the ages, the city has been passed from hand to hand in many different circumstances.

The city has belonged to the Poles, the Czechs, the Hungarians and the Germans.

Although almost seventy percent of its urban fabric was destroyed in the Second World War, Wroclaw managed to rise from the ruins and now boasts many an architectural monument.

The city currently features nearly eight thousand tenements - one of the largest complexes of this type found in Poland and, furthermore, in Europe.

The oldest tenements originated in the Middle Ages and the Renaissance, and are surrounded by Baroque, Classicist, Art Nouveau and modernist architecture.

This publication comprises a compelling selection of more than 150 buildings - from avant-garde residential blocks dating from the sixties and seventies via the Centennial Hall - recognised by the American Getty Foundation as one of the ten most important examples of twentieth century modernism - to modern buildings and the Ozeaneum in the Zoo.