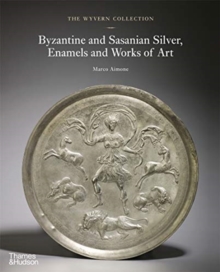 The Wyvern Collection: Byzantine and Sasanian Silver, Enamels and Works of Art Hardback

Late Antiquity and the early Middle Ages are now understood as times of extraordinary skill and creativity in the decorative arts.

In the Eastern Roman Empire (Byzantium) artists and craftsmen transitioned from 'Roman' to 'Byzantine' art and inspired a move from naturalism to a more hieratic and symbolic style, drawing on the deep artistic links connecting the Mediterranean world and the East. The many spectacular artefacts from this period in the Wyvern Collection are luxury objects, most commissioned by wealthy patrons or the Church, ranging in date from the fourth century to around 1300.

Masterpieces of great significance for art history, including a 5th-century Artemis missorium, previously unpublished, and an 11th-century enamelled enkolpion from Constantinople are among the highlights of the collection.

Other extraordinary objects - Late Roman chariot decorations, a stone funerary door from Syria and brooches brought across Europe by the families of Roman soldiers - complete this artistic panorama of the great Mediterranean and Persian civilizations, whose creative influence extended to the far west of the Islamic world. The catalogue, by Byzantine metalwork expert Marco Aimone, is augmented by three essays from technical specialists: Jack Ogden (enamelling), Peter Northover (metallurgy) and Erica Cruikshank Dodd (hallmarks).