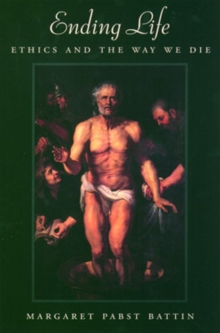 Ending Life : Ethics and the Way We Die Paperback / softback

Margaret Pabst Battin has established a reputation as one of the top philosophers working in bioethics today.

This work is a sequel to Battin's 1994 volume The Least Worst Death.

The last ten years have seen fast-moving developments in end-of-life issues, from the legalization of physician-assisted suicide in Oregon and the Netherlands to furor over proposed restrictions of scheduled drugs used for causing death, and the development of "NuTech" methods ofassistance in dying.

Battin's new collection covers a remarkably wide range of end-of-life topics, including suicide prevention, AIDS, suicide bombing, serpent-handling and other religious practices that pose a risk of death, genetic prognostication, suicide in old age, global justice and the "duty to die," andsuicide, physician-assisted suicide, and euthanasia, in both American and international contexts. As with the earlier volume, these new essays are theoretically adroit but draw richly from historical sources, fictional techniques, and ample factual material.