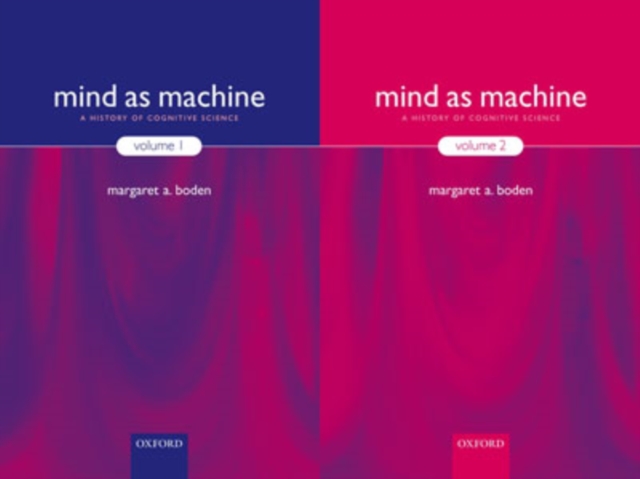 by Margaret (University of Sussex) Boden

Cognitive science is among the most fascinating intellectual achievements of the modern era.

The quest to understand the mind is an ancient one. But modern science has offered new insights and techniques that have revolutionized this enquiry.

Oxford University Press now presents a masterly history of the field, told by one of its most eminent practitioners.

Psychology is the thematic heart of cognitive science, which aims to understand human (and animal) minds.

But its core theoretical ideas are drawn from cybernetics and artificial intelligence, and many cognitive scientists try to build functioning models of how the mind works.

In that sense, Margaret Boden suggests, its key insight is that mind is a (very special) machine. Because the mind has many different aspects, the field is highly interdisciplinary.

It integrates psychology not only withcybernetics/AI, but also with neuroscience and clinical neurology; with the philosophy of mind, language, and logic; with linguistic work on grammar, semantics, and communication; with anthropological studies of cultures; and with biological (and A-Life) research on animal behaviour, evolution, andlife itself.

Each of these disciplines, in its own way, asks what the mind is, what it does, how it works, how it develops--and how it is even possible.

Boden traces the key questions back to Descartes's revolutionary writings, and to the ideas of his followers-and his radical critics-through the eighteenth and nineteenth centuries.

Her story shows how controversies in the development of experimental physiology, neurophysiology, psychology, evolutionary biology, embryology, and logic are still relevant today.

Then she guides the reader through the complex interlinked paths along which the study of mind developed in the twentieth century. Cognitive science covers all mental phenomena: not just 'cognition' (knowledge), but also emotion, personality, psychopathology, social communication, religion, motor action, and consciousness.

In each area, Boden introduces the key ideas and researchers and discusses those philosophical critics who seecognitive science as fundamentally misguided. And she sketches the waves of resistance and acceptance on the part of the media and general public, showing how these have affected the development of the field.

No one else could tell this story as Boden can: she has been a member of the cognitive science community since the late-1950s, and has known many of its key figures personally.

Her narrative is written in a lively, swift-moving style, enriched by the personal touch of someone who knows the story at first hand.

Her history looks forward as well as back: besides asking how state-of-the-art research compares with the hopes of the early pioneers, she identifies the most promising current work.

Mindas Machine will be a rich resource for anyone working on the mind, in any academic discipline, who wants to know how our understanding of mental capacities has advanced over the years.