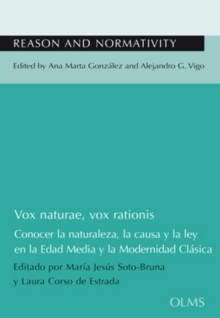 Throughout its eleven chapters, this volume deals with an abundance of sources confronting the problem of teleology in nature over the lengthy period from the 9th to the 17th century, considering this issue from the perspective of the history of philosophy.

In this context, the studies within this book analyse the central themes of nature-rationality, nature-causality, nature-teleology and normativity.

These themes emerge in the speculative efforts of human rationality in order to achieve, in its intellection of the world, a reading of nature, of its intrinsic composition and its projections into the philosophy of mankind as well as into the domain of its perfective development.