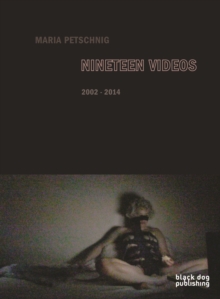 Maria Petschnig: Nineteen Videos 2002-2014 richly illustrates the work made between 2002 and 2014 of NY-based video and performance artist Maria Petschnig.

Through her lens, Petschnig captures a fetishised, disquieting and humorous world, realised in dry, dark fantasies and crude dystopias.

Depicting an awkward kind of eroticism, her powerfully provocative video pieces employ a keen understanding of the body and sexuality to invert subject-object relations, thereby positing a contemporary response to the old politics of identity, while avoiding an easy alliance with third-wave feminism's reclaiming of sexuality as power.

Petschnig's projects often simulate voyeuristic encounters; the camera and the subject, the directed and the staged squirm somewhere between invited exhibitionism and forced voyeurism.

Questioning hierarchies of vision, her videos never grant the viewers the pleasure of simply watching.

Instead, they are constantly reminded of being complicit in their gaze and made aware of what remains unknowable or out of their view.

Likewise, the domain the artist establishes in many works is one that emphasises this ambiguity of 'public' and 'private'.In addition to a number of essays and interviews, Maria Petschnig: Nineteen Videos 2002-2014 features a preface by Christopher Y Lew, curator at the Whitney Museum of American Art. Other contributors include Natalie Bell, Travis Diehl, Barbara London, Joshua Sandler, Wendy Vogel and Genevieve Yue.