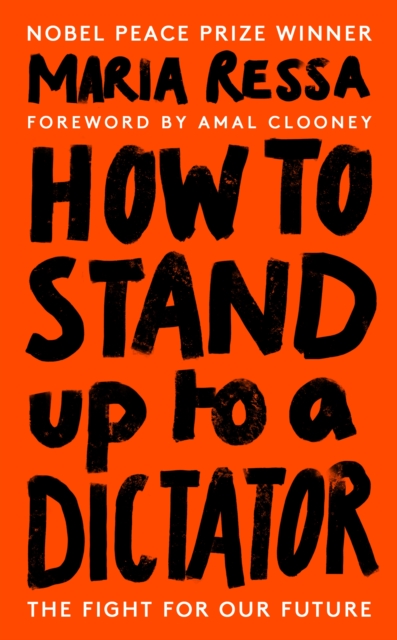 How to Stand Up to a Dictator : Radio 4 Book of the Week Hardback

*RADIO 4 BOOK OF THE WEEK*WINNER OF THE NOBEL PEACE PRIZE 2021What will you sacrifice for the truth?Maria Ressa has spent decades speaking truth to power.

But her work tracking disinformation networks seeded by her own government, spreading lies to its own citizens laced with anger and hate, has landed her in trouble with the most powerful man in the country: President Duterte. Now, hounded by the state, she has multiple arrest warrants against her name, and a potential 100+ years behind bars to prepare for - while she stands trial for speaking the truth. How to Stand Up to a Dictator is the story of how democracy dies by a thousand cuts, and how an invisible atom bomb has exploded online that is killing our freedoms.

It maps a network of disinformation - a heinous web of cause and effect - that has netted the globe: from Duterte's drug wars, to America's Capitol Hill, to Britain's Brexit, to Russian and Chinese cyber-warfare, to Facebook and Silicon Valley, to our own clicks and our own votes. Told from the frontline of the digital war, this is Maria Ressa's urgent cry for us to wake up and hold the line, before it is too late. Praise for Maria Ressa:Winner of the UNESCO Press Freedom Award 2021'A personal hero of mine ... she's an important warning for the rest of us' Hillary Clinton'Maria Ressa is 5ft 2in, but she stands taller than most in her pursuit of the truth'Amal Clooney'Maria is a key voice ... she is so incredible in so many ways'Carole Cadwalladr