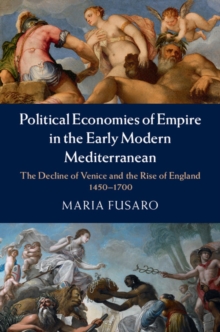 Political Economies of Empire in the Early Modern Mediterranean : The Decline of Venice and the Rise of England, 1450-1700 Hardback

by Maria (University of Exeter) Fusaro

Against the backdrop of England's emergence as a major economic power, the development of early modern capitalism in general and the transformation of the Mediterranean, Maria Fusaro presents a new perspective on the onset of Venetian decline.

Examining the significant commercial relationship between these two European empires during the period 1450-1700, Fusaro demonstrates how Venice's social, political and economic circumstances shaped the English mercantile community in unique ways.

By focusing on the commercial interaction between Venice and England, she also re-establishes the analysis of the maritime political economy as an essential constituent of the Venetian state political economy.

This challenging interpretation of some classic issues of early modern history will be of profound interest to economic, social and legal historians, and provides a stimulating addition to current debates in imperial history, especially on the economic relationship between different empires and the socio-economic interaction between 'rulers and ruled'.