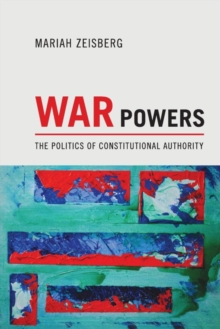 Armed interventions in Libya, Haiti, Iraq, Vietnam, and Korea challenged the US president and Congress with a core question of constitutional interpretation: does the president, or Congress, have constitutional authority to take the country to war?

War Powers argues that the Constitution doesn't offer a single legal answer to that question.

But its structure and values indicate a vision of a well-functioning constitutional politics, one that enables the branches of government themselves to generate good answers to this question for the circumstances of their own times.

With cases ranging from the Mexican War and World War II to the Cold War, Cuban Missile Crisis, and Iran-Contra scandal, War Powers reinterprets central controversies of war powers scholarship and advances a new way of evaluating the constitutional behavior of officials outside of the judiciary.