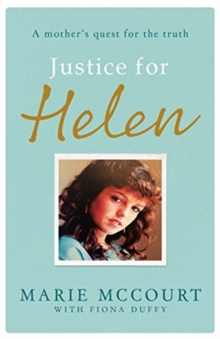 Justice for Helen: As featured in The Mirror : A mother's quest to find her missing daughter Paperback / softback

As featured in The Mirror, this is the story of mother's quest to find her murdered daughterBurying a child is every parent's nightmare.

But Marie McCourt has spent over 30 years yearning to do just that. On 9 February 1988, Marie's 22-year-old daughter, Helen, left her office in Liverpool city centre and began her usual commute home.

But she was never seen again. . . Within days, local pub landlord Ian Simms was charged with her murder.

Despite Helen's body not being found, overwhelming DNA and circumstantial evidence at his trial secured his conviction, and he was sentenced to life. But Simms' refusal to disclose the whereabouts of Helen's body means that Marie and her family have never been able to have a grave at which they can lay flowers and pay their respects. For over 30 years, Marie has searched, in vain, for her daughter's body and campaigned tirelessly to prevent other families from facing the same horrifying fate, taking her fight to the houses of parliament.

The resulting 'Helen's Law', ground-breaking legislation that recognises the distress caused to families of missing homicide victims, was passed in November 2020. This is the incredible story of a mother, devastated by the loss of her daughter, whofound the strength and determination to change the law.