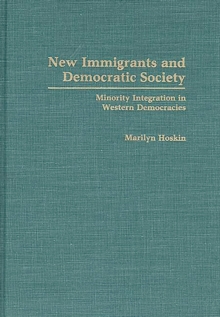 In her examination of popular theories about why citizens are hostile to foreigners, she concludes that virtually none of these theories are supported by empirical observations.

Hoskin then illustrates the similarities between reactions to immigrants in American and European nations, concluding that acceptance and integration are functions of attitude rather than geography, national history, or economic context. The book begins with an overview of the cross-national dimensions of immigration and a comparison of the official and unofficial policies which have developed in the four nations included in the study.

It then investigates factors which represent directed, popularized theories of why members of the mass public react in the way they do to immigrants.

Hoskins devotes separate chapters to the validity of such theories.

The concluding chapter returns to the original question raised in the overview, namely whether general or specific contextual factors are instrumental in shaping how mass publics respond to foreigners in their societies.

Concluding with suggestions for reconciling policy and process related to this important sociopolitical issue, this work will be of interest to college audiences teaching or studying American, international, and comparative politics, as well as sociology.