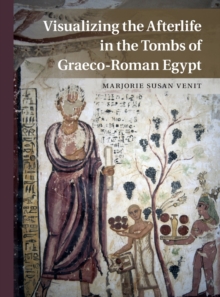 Visualizing the Afterlife in the Tombs of Graeco-Roman Egypt Hardback

Lost in Egypt's honeycombed hills, distanced by its western desert, or rendered inaccessible by subsequent urban occupation, the monumental decorated tombs of the Graeco-Roman period have received little scholarly attention.

This volume serves to redress this deficiency. It explores the narrative pictorial programs of a group of decorated tombs from Ptolemaic and Roman-period Egypt (c.300 BCE-250 CE).

Its aim is to recognize the tombs' commonalities and differences across ethnic divides and to determine the rationale that lies behind these connections and dissonances.

This book sets the tomb programs within their social, political, and religious context and analyzes the manner in which the multicultural population of Graeco-Roman Egypt chose to negotiate death and the afterlife.