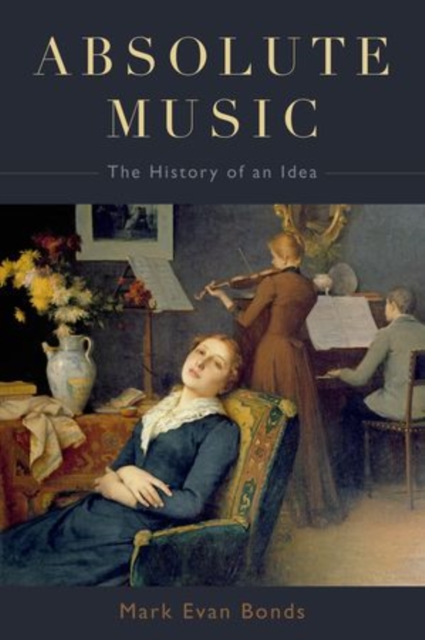 Absolute Music : The History of an Idea Hardback

What is music, and why does it move us? From Pythagoras to the present, writers have struggled to isolate the essence of "pure" or "absolute" music in ways that also account for its profound effect.

In Absolute Music: The History of an Idea, Mark Evan Bonds traces the history of these efforts across more than two millennia, paying special attention to the relationship between music's essence and its qualities of form, expression, beauty, autonomy, as well as itsperceived capacity to disclose philosophical truths. The core of this book focuses on the period between 1850 and 1945.

Although the idea of pure music is as old as antiquity, the term "absolute music" is itself relatively recent.

It was Richard Wagner who coined the term, in 1846, and he used it as a pejorative in his efforts to expose the limitations of purely instrumental music.

For Wagner, music that was "absolute" was isolated, detached from the world, sterile.

His contemporary, the Viennese critic Eduard Hanslick, embraced this quality ofisolation as a guarantor of purity.

Only pure, absolute music, he argued, could realize the highest potential of the art.

Bonds reveals how and why perceptions of absolute music changed so radically between the 1850s and 1920s.

When it first appeared, "absolute music" was a new term applied to old music, but by the early decades of the twentieth century, it had become-paradoxically-an old term associated with the new music of modernists like Schoenberg and Stravinsky.

Bonds argues that the key developments in this shift lay not in discourse about music but rather the visual arts.

The growing prestige ofabstraction and form in painting at the turn of the twentieth century-line and color, as opposed to object-helped move the idea of purely abstract, absolute music to the cutting edge of musical modernism.

By carefully tracing the evolution of absolute music from Ancient Greece through the Middle Ages to the twentieth-century, Bonds not only provides the first comprehensive history of this pivotal concept but also provokes new thoughts on the essence of music and how essence has been used to explain music's effect. A long awaited book from one of the most respected senior scholars in the field, Absolute Music will be essential reading for anyone interested in the history, theory, and aestheticsof music.