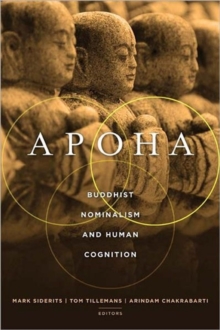 When we understand that something is a pot, is it because of one property that all pots share?

This seems unlikely, but without this common essence, it is difficult to see how we could teach someone to use the word "pot" or to see something as a pot.

The Buddhist apoha theory tries to resolve this dilemma, first, by rejecting properties such as "potness" and, then, by claiming that the element uniting all pots is their very difference from all non-pots.

In other words, when we seek out a pot, we select an object that is not a non-pot, and we repeat this practice with all other items and expressions. Writing from the vantage points of history, philosophy, and cognitive science, the contributors to this volume clarify the nominalist apoha theory and explore the relationship between apoha and the scientific study of human cognition.

They engage throughout in a lively debate over the theory's legitimacy.

Classical Indian philosophers challenged the apoha theory's legitimacy, believing instead in the existence of enduring essences.

Seeking to settle this controversy, essays explore whether apoha offers new and workable solutions to problems in the scientific study of human cognition. They show that the work of generations of Indian philosophers can add much toward the resolution of persistent conundrums in analytic philosophy and cognitive science.