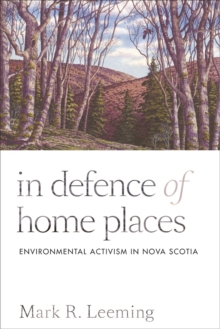 As environmental deterioration became a major social and political issue near the end of the twentieth century, activists in Nova Scotia stood together to defend the places they called home.

Political radicals and conservatives alike worked to achieve legislative and social success, even as they disagreed over fundamental principles.

In Defence of Home Places examines the diversity of this movement, its early accomplishments, and the disagreements that caused its eventual weakening and division.

It places Nova Scotian environmental activism within national and international contexts and explores the choices and tactics that brought about its greatest successes and failures.